As I mentioned previously, I had the opportunity to go to Hawaii this summer. My brother was presenting at a conference in Waikiki and my parents thought the whole family hadn't spent enough time together recently so they insisted we all go (fortunately, they did the heavy financial lifting to get me there... Yay Parents!). So here are some pretty pictures I took from the 50th state (which according to the birther crazies isn't a state at all... go figure).

The first island we visited was Maui where we stayed at Wailea. Wailea is on the East lobe of Maui, and a convenient distance to the most recent eruption on Maui, La Pérouse Bay. The best guess for the age of the most recent eruption is around 1790. There has been some minor controversy about this. The reason why 1790 is an approximate age is French explorer Jean-François de Galaup, comte de La Pérouse landed in Maui in 1786 and made a map of the bay, when George Vancouver landed in 1794, there was a basaltic peninsula that wasn't on La Pérouse's map.

The controversy lies in the dating of the eruption and general cartography. Reported radiometric dating of the basalt suggest it is closer to 1490 (however, I wasn't able to find a paper on this, just a brochure from a tourist kiosk). Some scientists have also questioned the quality of La Pérouse's mapmaking skills (apparently, some claim, you wouldn't recognize ANY of the islands from his maps). Though I did find this quick blurb in GSA Bulletin by Oostdam (1965). He argues that that La Pérouse's maps were, in fact, very reliable for their day. Below is a shot looking back towards Haleakala of one of the most recent flows on Maui. 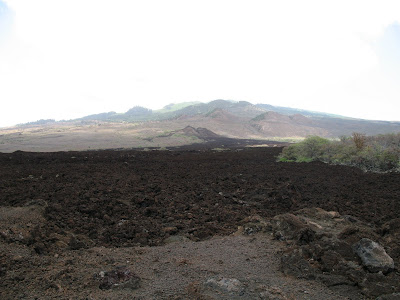 In any event, these eruptions lead to the existence of black sand beaches. It was one of my goals to find such a beach just so I could collect a small vial of black sand (which now sits prominently upon my bookshelf). Here is a photo overlooking just such a beach near La Pérouse Bay. 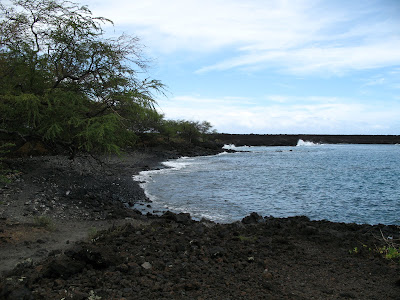 And I might as well wrap up this post with a picture of Pu'u Ola'i which is the remnant of a cinder cone on the island of Maui that was active about 0.1 Maa. 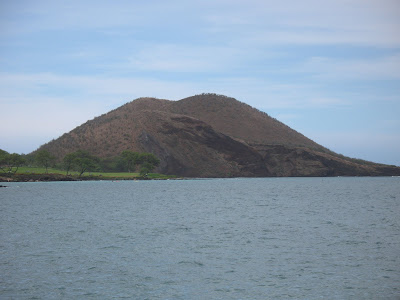 A friend of mine posted a link to this article from the telegraph. They found a 150 Ma old belemnite that still had its ink sac. What's more the paleontologists, being the witty characters they are, used some of the ink to draw the animals portrait and write its name!!! 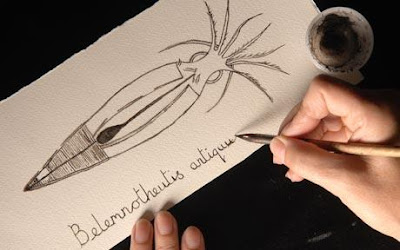 The specimen now resides with the BGS in Nottingham. Truly, an awesome find. And a pretty spiffy drawing. I wonder if the BGS will sell prints of that image....
Posted by Bryan at 12:40 PM No comments: Links to this post

Getting Back in the Swing of Blogging

It has been quiet around this corner of the ol' intertoobz for a couple of weeks. What can I say, I've been busy. During this time I've also inexplicably managed to get out and about a bit. My family had a quick reunion over on Oahu, Maui, and Hawaii (I will post a series of pictures when I get the chance), I also attended a friend's wedding in Portland, OR (Powell's is AMAZING, GSA attendees should plan a visit), and helped my mom with her recovery from surgery (bone spurs on the 1st and 2nd cervical vertebrae, and also the reason we had a family reunion in HI before the surgery).

Right now, I am waiting to get access to a large scanner that can scan in several figures that are 3.5 m long. So I figured I would peruse the blogosphere. This post on early geology, and how it influenced Charles Darwin, caught my attention over at Pharyngula. It skips over Steno, but it is a decent summary just the same.

I'm sure if you follow my humble blog you probably are already familiar with Iconic Science Blog Pharyngula. So why the cross-post you may ask. Well, it is purely for selfish reasons. I wanted to place the link somewhere that I wouldn't lose it. The options were to either email it to myself or post it on ITV. Since my mail inbox is becoming increasingly difficult to sift through, ITV wins out. Enjoy (if you haven't already)!
Posted by Bryan at 1:12 PM No comments: Links to this post