Not Geology, but may interest people in any work environment

I found this while looking through my blog roll on the right. It was on the banner on the Science Blogs sites.

I wonder if this also applies to a person's home life. Read "I dislike my noisy as (expletive) neighbors".

edit: sorry, the above link is wrong. I went to the I'm Voting Republican thing earlier that day and must not have cleared the link from my clip-board. It has been fixed.

This sounds like the start of an old joke 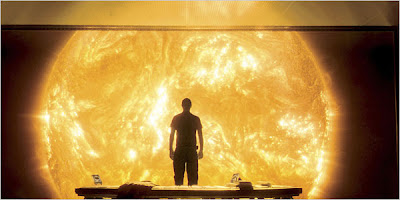 From: Sunshine (2007)
NASA is planning on visiting the sun!
Finally, we can experience the joy of the movie "Sunshine" (note: unless you enjoy movies that make "The Core" look like an excellent film, don't bother actually watching it).

Actually, I am fairly excited about this possibility. The mission will take approximately 7 years to get there, and is planned to launch in 2015. Making 2015 potentially a very eventful year (Last I checked, admittedly a while ago, they were planning on starting the first steps of a manned mission to Mars that year as well). The probe (Solar Probe+) will be close enough to sample the solar winds directly, as well as the suns magnetic field (which may shed light on how the corona maintains a much higher temperature than the surface of the sun).

Not much else is said about the probe (still early in the design phase) but the possibility of visiting the sun is tantalizing. I'm surprised we haven't made an attempt before now. But then again there are engineering constraints that hindered this endeavor. The probe will have to be able to withstand 1400°C. So, it will have a heat shield (I don't know if it will just take readings behind the heat shields, or if the sensors will also have to withstand 1400°C. The diagram shows them sticking out a bit, but it looks more like an artistic rendering than anything else). It is also expected to experience several storms toward the end of its mission, which may destroy the probe, but we should get some valuable data along the way.
Posted by Bryan at 5:06 PM No comments: