I realize a disproportionate amount of my posts recently have been a part of memes. So I am going to continue uploading some of my Glacier National Park Photos. Here is Part I, Part III, and Part IV.

This evening, when I needed a break from thesis-ing, I took a gander out the window in the grad office. It had started to snow. This looks like it might be the first snowfall that will stick around more than a couple of minutes in Bozeman this year (I kid you not, it was 72 F just 2 days ago). So this comes as somewhat good news. Good if you like winter activities, and don't like summer droughts/fires. Bad if you don't like driving on the roads where they usually "forget" to put down gravel. Hell, walking around campus can be a tricky affair as they tend to zamboni the walkways when they should be plowing them.

Why this brief aside from Glacier? Because last winter looked like it would lead to a dry summer as well. What ended up happening, as I mentioned in my last post, is Montana got a lot of late spring snow. This resulted in Going to the Sun Highway to remain closed until the day we got there. Here is a shot of us driving on the just-opened road up to Logan Pass (uh... car side mirror for scale). Keep in mind this was July 3rd. 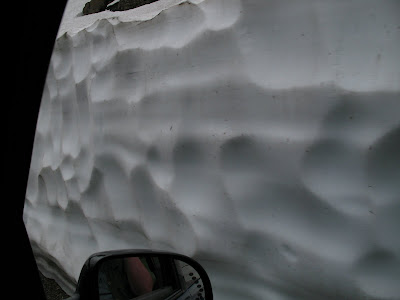 The rest area at the top of Logan pass provided some spectacular views as well. 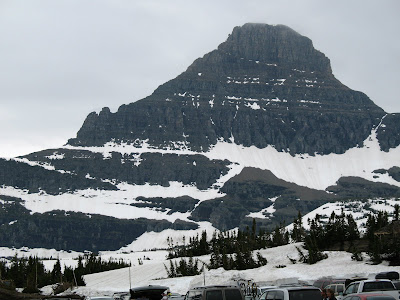 This is an arete that dominated the view from the rest stop. Well, most people were absorbed by how high the snow was. But I was suitably impressed by the rocks. 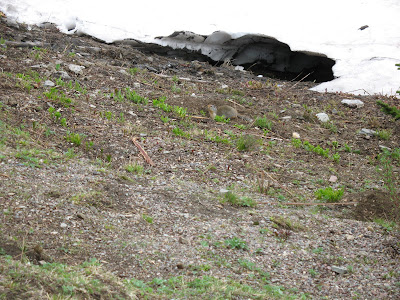 This little guy was running around and making quite the fuss at all the big dumb people wandering around what had been (until a few hours prior) his family's home. I dubbed him Rodney. 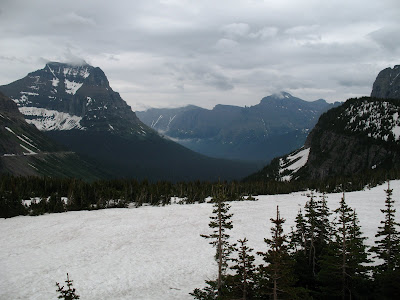 This is a nice shot of a small snowfield just below the parking area. It overlooks a beautiful U-shaped valley which looks a little something like this: 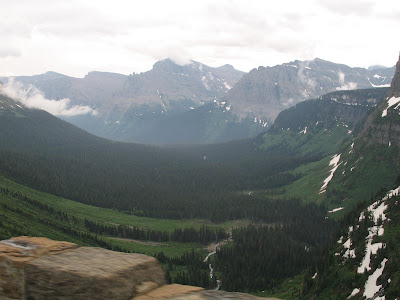 I particularly like the misfit stream running down the center of the valley. I think that will be all for this set of photos. Knowing my somewhat sporadic posting habits, it shouldn't be too long until I realize I have nothing to post except for Glacier Photos III the Search for Rock.
Posted by Bryan at 11:50 AM