Haikus and the Permian Extinction 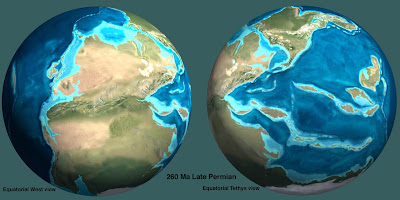 Greatest test of life
the Permian extinction
a river preserves

This is in reference to the R.M.H. Smith article that came out a few years ago (available here via LANL). Essentially, he looked at the fluvial deposits in the Karoo foreland basin that span the Permo-Triassic boundary. He noted that the fluvial architecture changes at approximately the same location as the boundary. He goes into some potential causes for the changing styles across the boundary, including both climatic and tectonic controls. However, he stops short (thankfully) of claiming that rivers changing caused the extinction. Instead, he takes a more agnostic position on the cause of the extinction, but points out that changing fluvial styles can contribute to an extinction/extirpation event. (note: I think extirpation is the right word, animals are just forced to leave a habitat because they aren't suited to it, but I could be wrong on this).

So the dicynodonts leaving the Karoo basin may have been prompted by the changing fluvial styles , but they may not have become extinct at that point (which allowed the invasion of the Lystrosaurs into the area). Or they may have gone extinct in the Karoo basin, but we don't have sufficient stratigraphic resolution to confirm this. Either way, I thought it was a very good article.

Others involved in the meme: Suvrat (the instigator), MJC rocks, Lockwood, and Kim.
Citations:
Picture from: http://jan.ucc.nau.edu/~rcb7/globehighres.html, retrieved on 11-12-2008

Thank you very much