But Your Hamster Already Knew This... 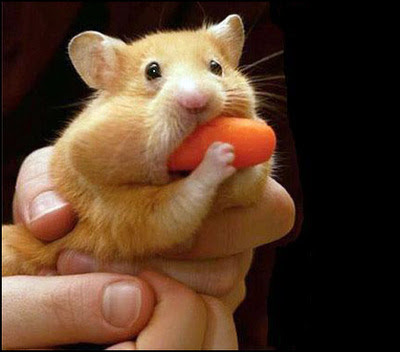 As I mentioned in the last post, precognition in animals is a pervasive, troubling misconception. I'm sure you are all familiar with this myth in one of its many forms. Horses want to be outside before an seismic event, dogs "know" when their masters are returning home, or cows will lie down if it is going to rain. The problem with most of these claims is the phenomenon known as confirmation bias. To put it another way; you remember the hits (when the animal confirms this misconception), and forget the misses (the numerous times when the animal doesn't exhibit the behavior in question).
Animals and Seismicity
This is a poorly constrained hypothesis to test. First off what magnitude seismic event is required to trigger this "sense". Annually there are over a million estimated earthquakes, but the magnitude of most of these events is minor (source: USGS). Let's just limit this to magnitude 4 and above, and give the added caveat that it has to be an event that the USGS will bother to locate the epicenter. In 2008, there were 14,237 earthquakes that fit these criteria (528 in the USA alone). This translates that, worldwide, there were 39 earthquakes a day (1.45 a day in the USA). Part of this descrepancy can be explained away by the presence of oceanic plate boundaries. But that still leaves 1.45 Earthquakes/day in the USA alone.

Secondly, what observed behavior is expected to result in a "confirmed" observation. One site that claims that this is a verifiable fact defines the behavior of animals as "mild response to bizarre behavior". This is a poorly defined criterion to test at best. What constitutes bizarre behavior? How are the animals being observed. Most of the data appear to be reported annecdotally. Which is highly subjective under the best of circumstances. Rancher A might think it is perfectly normal that animal Q walks counter-clockwise instead of clockwise before sitting down, while Rancher X might view that as a bizarre deviation and prepares for the "big one".

Thirdly, what is the window where observed behavior is related to a seismic event? Is it one day, one hour, one year? It turns out, it is whatever time frame is required to support your hypothesis:

Seriously? An animal acts "bizarrely" a month or two before an event is used as confirmation? You know, I went to Europe a month or two before, across the country, turkeys were killed and served up in a delicious feast dedicated to giving thanks. By this individuals logic, the two are probably related.

All these problems compound upon themselves into a confirmation bias that "explains" a potential cause for odd behavior after an unrelated event coincidentally happens at approximately the right time.
Pets "know" when you are coming home
Consider, if you will, you are coming home at the end of a busy day at the office. Eagerly awaiting your return is your dog. When you open the door, there your good buddy is waiting to jump up on you (no matter how hard you try to teach them not to). Clearly this is an example of your dog "knowing" that you will be returning home at any given minute. This can't possibly be explained as the dog heard your car, or your footsteps, or your key in the lock.

Granted, this is a simple scenario. Most people would be willing to concede this as a possibility. However, there are a number of individuals who take it a step further and claim that their pets know when they are leaving their office and start getting excited several minutes before any signs of the owner returning home are generated. For example, the following story:

The following case is typical of those cited as proof of ESP. It is unusual only in that it involves belief in a psychic dog, rather than a psychic human. The dog in question is a terrier who has achieved fame as having ESP as exhibited by his ability to know when his owner, Pam Smart, is deciding to come home when she is away shopping or on some other business. The dog's name is Jaytee. He has been featured on several television programs in Australia, the United States and England, where he resides with Pam and her parents, who were the first to perceive the dog's psychic abilities. They observed that the dog would run to the window facing the street at precisely the moment Pam was deciding to come home from several miles away. (How the parents knew the precise moment Pam was deciding to come home is unclear.) Parapsychologist Rupert Sheldrake investigated and declared the dog is truly psychic. Two scientists, Dr Richard Wiseman and Matthew Smith of the University of Hertfordshire, tested the dog under controlled conditions. The scientists synchronized their watches and set video cameras on both the dog and its owner. Alas, several experimental tries later, they had to conclude that the dog wasn't doing what had been alleged. He went to the window and did so quite frequently, but only once did he do so near the exact time his master was preparing to come home and that case was dismissed because the dog was clearly going to the window after hearing a car pull up outside his domicile. Four experiments were conducted and the results were published in the British Journal of Psychology (89:453, 1998).

There we go, nicely debunked. There have been other studies which propose possible explanations for why dogs, like Jaytee, may seem to exhibit precognition. Essentially the argument goes: Dogs are pack animals, and don't necessarily like being left alone. Being left alone will increase the amount of stress a dog experiences. Dogs also learn from where you (the owner) are likely to return from (i.e. the front door). When they go to look for you, they will typically start with where they expect to return. As the duration of their solitude increases, so does their anxiety to be reunited with the pack. This results in returning to the spot where they expect your return more often. As a result, some individuals misinterpret this behavior as a manifestation of ESP. More examples of Precognition in Dogs is available from How Dogs Think by Stanley Coren.
Animals and Weather
Every field trip, one of my friends in undergrad would tell the story of his childhood friend explaining that "Cows will sit down when it is going to rain". When my friend would show him pastures of cows (some sitting and some standing) his friend would explain it away by saying that it meant an x% chance of rain (x being the percentage of cows sitting).

Aside from my friends anecdote, I have not come across this one often. Usually the person telling the story is the most open to the possibility of a "mundane" explanation. The mundane explanation being they heard thunder in the distance, or some similar notion. But every time I go into the field these days, I can't help but think about cows standing around in a pasture. One of these days I will remember to take a photo of cows standing around in a rain storm. Until then, this photo I found on the internet of cows in a driving rain will have to do: 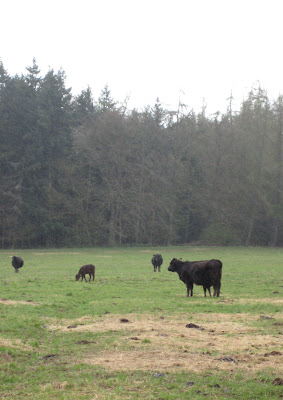 EDIT: 15 Feb 2010
Just found out on Twitter (via Mactavish) that there is a video of a dog 'sensing' an earthquake before people do in the same building. Scrolling through the comments, one individual got the answer right away:

rbelloq:Actually, if you watch closely, especially the light at the top right corner (it's the white pixels﻿ at the very top of the frame on the right), you can see the pixels start to jiggle at nearly the same instant the dog gets up.
It looks like a very fast reaction to the tremor.

I remember reading about a school science project where the students counted up lost/missing pet ads from the classifieds sections of newspapers for the weeks and months leading up to some earthquakes as well as for some time periods where there were not earthquakes. Their reasoning was that unusual animal behavior before an earthquake might manifest itself as in increase in pets running away which people would then advertise to find. Anyway, they found no correlation between the occurrence of classified ads about missing pets and the occurence or absence of earthquakes.

Cows are rubbish at predicting earthquakes too http://hypocentre.wordpress.com/2009/01/15/did-the-earth-moo-ve-for-you/

Dog Doors give you and your pet the freedom they deserve.

We have a facetious saying, A sitting cow is a happy cow, the theory being that only full cows can afford to sit/lie down. In Nevada, they are rarely sitting, it seems.