We Chose to Go to the Moon 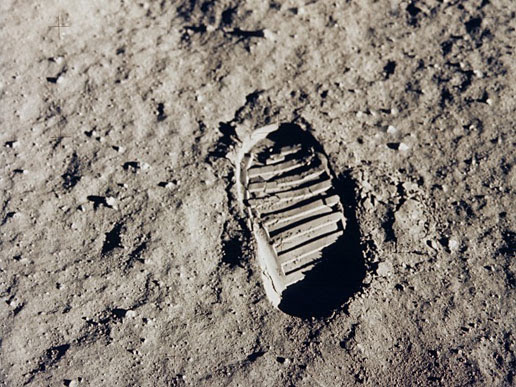 Forty years ago today, mankind first walked on another celestial body. It was the result of a decade of dedicated work from countless scientists and engineers. It was the result of government sponsored science. And it has been 36 years 7 months 1 day since we've matched that endeavor. Here's to returning to the moon by the 50th anniversary.

But why, some say, the moon? Why choose this as our goal? And they may well ask why climb the highest mountain? Why, 35 years ago, fly the Atlantic? Why does Rice play Texas?
We choose to go to the moon. We choose to go to the moon in this decade and do the other things, not because they are easy, but because they are hard, because that goal will serve to organize and measure the best of our energies and skills, because that challenge is one that we are willing to accept, one we are unwilling to postpone, and one which we intend to win, and the others, too.

-Excerpt from JFK's 'We Choose to go to the Moon' speech
Posted by Bryan at 2:56 PM 2 comments:

I saw 'Contact' on TV the other day and it got me curious about how those astronomers over at SETI are doing these days. One of the first hits on the internet is a link to a project called SETI@home. It is an interesting idea, SETI has acquired a MASSIVE amount of data over the years (and they are still collecting it). It will take them some time for them to comb through all their data on their own, so they've joined a program that allows individuals to 'donate' their idle computer time to running tedious calculations. The result is that SETI now has a computer that can process >500 TeraFLOPS (faster than most of the world's computers). 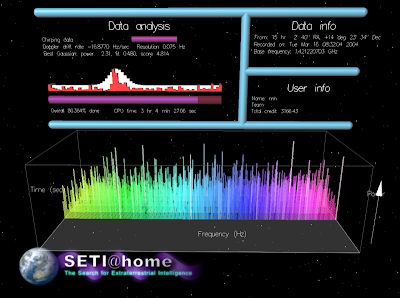 The group that set up this operates out of Berkeley and is called BOINC for short (Berkeley Open Infrastructure for Network Computing). SETI is only one of a list of potential projects that take advantage of grid computing. You can help model protein folding, the N Queens problem (for the math and chess lovers of the world), or even the universe. Now that I think about it, I remember Eric donating his laptop's idle time to modeling climate change.
Posted by Bryan at 6:02 PM 1 comment: