Jere Lipps For The Win (and Introductory Geological Concepts 2)

I just received one of those mass emails from SEPM. Turns out that SEPM is honoring Jere Lipps with the 2010 Moore Medal. This is a well deserved honor. Here is the announcement:

SEPM Society for Sedimentary Geology announces that Dr. Jere Lipps (University of California, Berkeley, CA) has been awarded the 2010 Moore Medal for excellence in the study and application of paleontology.

Dr. Lipp's contributions to paleontology range across many fields, including micropaleontology, molluscan paleocommunities, general paleobiology (including organism responses to climate change), and temporal assessments ("temporal smearing") of extinction events owing to incompleteness of the fossil record (termed the "Signor-Lipps Effect"). He also has served the paleontological community as President of the Cushman Foundation for Foraminiferal Research, President of the Paleontological Society and Chair of the Association of North American Paleontological Societies, among others.

An added bonus to this is I get to reiterate how awesome the Signor-Lipps effect is and once more suggest people read about it. It is, probably, the preeminent study in regards to extinctions. So here is the link to the paper, and here are some links previous posts (wow, these look like my first posts) gushing about the effect.

Now if we apply this concept to the study of extinction events (this is where the Signor-Lipps effect comes into play), we would expect to see certain species disappearing from the fossil record before other species. Regardless of the cause of the extinction. So rare species with low preservation potentials should disappear lower, in the stratigraphic record, than abundant species with high preservation potentials. This will give the appearance of a gradual extinction (where species diversity is declining over a period of time) even if the extinction event is catastrophic (where all the species disappear at once). The implication of this is that gradual extinctions are indistinguishable from catastrophic extinctions in the stratigraphic record. Here is a visual representation of this idea (from Williams, 1994): 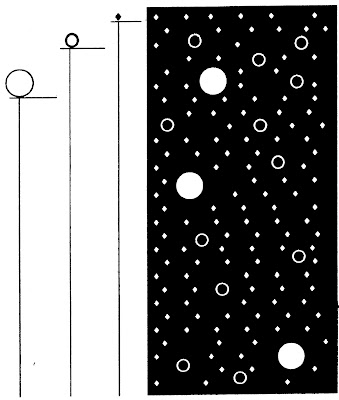 The larger the symbol the more rarely a species is preserved. The black box on the right is a representation of a stratigraphic column showing where each specimen was found. The lines leading to a symbol on the left give an approximate range of a species' duration. Rare species disappear from the rock record first, abundant species should disappear from the fossil record last. At this point, due to variable preservation potential within the fossil record, it is not possible for us to distinguish between a fast or slow extinction event. Jere Lipps was one of the first people to say it, so he deserves our congratulations.

Williams,M.E., 1994, Catastrophic Versus Noncatastrophic Extinction of the Dinosaurs: Testing, Falsifiability, and the Burden of Proof: Journal of Paleonotology v.68 p.183-190.
Posted by Bryan at 3:33 PM

I think in fact you can distinguish fast from gradual extinction, consider this:
If in a region there are two kinds of fossil A and B, both belong to species that are abundant and with high preservation potential, and if above certain depth fossil A abruptly disappears, isn't this considered as a fast extinction for species A?
More so if fossils belong to different abundant species disappear together at the same depth.
So, I think we can indeed differentiate fast or gradual extinction for ABUNDANT species, while this is not true for rare species with low preservation potential.

Except that in this hypothetical situation it is unclear if this represents an extirpation event rather than an extinction event. This has been demonstrated by MacLeod and Keller (1991), elaborated by MacLeod (1995), and has been discussed in relation to the PTr boundary by Smith (1995).

It is also unclear how much time would be represented by the surface at which "A" is removed from the stratigraphic record. This problem has been documented by Shanley and McCabe (1994).

Not to mention the fact that the terms "Gradual" and "Catastrophic" remain undefined in terms of extinction rates. Would a population going extinct in a century be considered catastrophic? A millennium? And given the limitations of chronostratigraphic resolution (plus/minus 40,000 years is the best resolution for the end-K extinction event), is such a distinction even meaningful?

Finally, if you are able to overcome these limitations, does the rate of extinction for "species A" relate significantly to an overall ecologic event? Ecosystems are exceedingly complex. If we don't have a thorough understanding of all the impacts of one species going extinct in the modern realm, how can we accurately infer the perturbations of an arbitrary extinction in the rock record? In short, studying extinction events in the rock record remains intractable given the current limitations of knowledge in related fields.