I didn't think I would be blogging about GSA, but I saw a presentation that I thought was quite good. Ian Jackson, whom I first met last year when I visited the BGS, gave a couple of talks on a relatively new project called OneGeology (it's been going for 1.5 - 2 years now, maybe more).

The goal of OneGeology is to make geologic maps from around the world freely accessible to anyone who wants them. I am fully in favor of open access to all data, as this is the best way for science to function. The driving point of Ian's talk was the vast discrepency between fully industrialized data who can zip about 'holodeck' representations of datasets and developing nations which might not even have a steady supply of electricity.

The need to understand geologic processes is a global concern. In some cases, it may even be more important to developing nations to have the access to high quality data sets than it is to industrialized nations. This project continues a theme I was picking up in several of the sessions I have attended thus far. There is a growing need for earth scientists to reach out to the general public and engender an appreciation for the role that the earth plays in our everyday lives.

I am certain that this goal is appreciated by anyone who might stumble onto this blog. However, of all the talks that touched on this need, Ian Jackson's talks were one of the few that actually proposed a means to achieve this objective.
Posted by Bryan at 3:55 PM No comments:

Mirror Mirror on the wall, what's the most bad-ass planet of them all?

Attached is a copy of the press release on this utterly bizarre planet. My advisor sent me a copy of this last night, along with his impression of this planet (which was, and I quote: "WTF"). All you need to know is there is indeed a place in the universe where it RAINS rubies and sapphires.... FROM THE SKY!

(PhysOrg.com) -- So accustomed are we to the sunshine, rain, fog and snow of our home planet that we find it next to impossible to imagine a different atmosphere and other forms of precipitation.

*This video is based on the work of Prof. Daniel Simons on Sustained Inattentional Blindness. It basically shows how worthless anecdotal evidence really is. Here's the paper on this.
Posted by Bryan at 2:27 PM No comments:

Crickets, Sitcoms, and the Scientific Method

The snowy tree cricket's chirp does, in fact, vary with ambient temperature.

(Although, the number of chirps I counted would mean Sheldon's apartment is about 50 degrees. Which doesn't really bother me, because the writers got the basic science correct. Even if they flubbed it on the sound effect).
The mistake Sheldon made was in an inadequate test for his hypothesis. To properly discount the possibility of the common field cricket, Sheldon needed additional data. Namely, he needed to (at the very least) change the ambient air temperature of the room and observe whether the number of chirps per second changed by an appropriate margin before he made any determination. If the chirps changed, it could likely be a snowy tree cricket. If the chirps remain constant, it is not a snowy tree cricket. If the chirps changed, but not according to the known relationship, it is inconclusive.

It seems, from my perspective, that the writers compared/contrasted how the public perceives science to function and how it actually functions. The public perception was portrayed by Sheldon's haphazard application of a factoid of science. The actual process of science was portrayed by Howard challenging Sheldon to provide sufficient data to make such a claim. The public perception of science seems to be centered on science as a body of facts, rather than science as a crucible for reality. All too often, scientists are portrayed as dictating what is reality. When in actuality, scientists are only constantly coming up with tests to disprove (or add further support) some notion of what reality is.

One small gripe with the episode. Once they caught the cricket, the game was over. The two types of cricket don't look anything like each other. Jiminy the Snowy Tree Cricket: 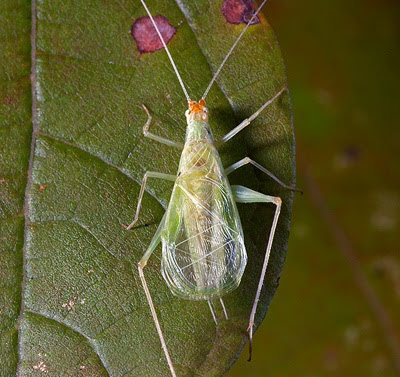 And Toby the Field Cricket: 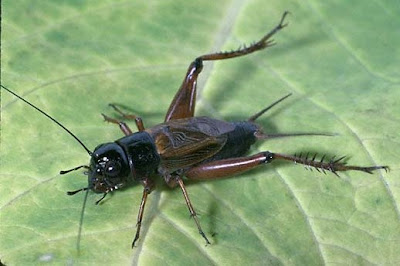 I really enjoy this show overall, and I think it is (generally) a good spokesman for science. I am glad that Sheldon was called on his poor methods (and ended up losing the bet). Hopefully, this subtle display about the scientific method, and the importance of peer review, is appreciated by the public consciousness.
Posted by Bryan at 5:51 PM No comments: