How To Get Your Student's Attention

One of Lockwood's recent Sunday Funnies segments had me laughing hysterically. So I figured I would re-post a slightly modified version which I think makes it all the better. It is a re-captioned Saturday Morning Breakfast Cereal comic originally about the joys of mathematics. 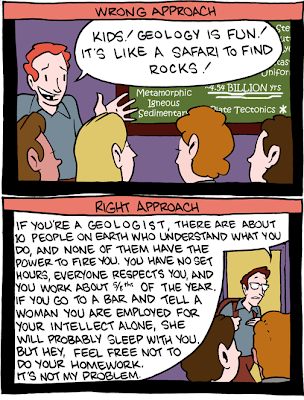 Today is the 150th Anniversary of the publication of "On the Origin of Species". I figured I would be able to quickly find a story and post a link and be done with it. Sadly, it is not that easy. Doing a quick news search yielded a top hit titled "Darwin Debate Rages on 150 Years After Origin". Of course the media has to trot out this canard.

Even 150 years after it first appeared in print, Charles Darwin's "On The Origin of Species" still fuels clashes between scientists convinced of its truth and critics who reject its view of life without a creator.

Really? This is a sad day for journalism indeed. I feel it is important to note that 'critic' must have been redefined to 'any boob pushing superstition'. I know that our media has this odd notion that objective journalism must include both sides of an issue, but that presupposes that reality has more than one valid view. Evolution says nothing about religion, nor should it attempt to. Science stays strictly in the natural world. Any attempt to move beyond the natural world moves beyond the realm of science.

The article moves on:

[N]o consensus is in sight, probably because Darwinian evolution is both a powerful scientific theory describing how life forms develop through natural selection and a basis for philosophies and social views that often include atheism.

Natural Selection is not synonymous with Social Darwinism or Atheism (and Atheism is also not synonymous with Social Darwinism, nor is Atheism 'evil'). This is a logical fallacy known as 'Poisoning the Well'. Essentially, the author is attempting to blame science for people abusing science. Science can make no moral judgment. Science is merely a self-correcting examination of the natural world. Science takes no philosophical position, but ignores philosophy by and large.

The rest of the article moves further away from the anything relevant to "On the Origin of Species". It begins to talk about Islam and Intelligent Design. They don't even quote an evolutionary biologist, or historian of science in this article. What? Were they all on vacation? How about a neat article on how Natural Selection is as important (maybe more important) to Biology as Plate Tectonics is to Geology.

All this pandering to insecure superstitious saps seems to have made me a bit glum. Since I want to end on a positive note, here is a beautifully elegant image to complement Darwin's sketch of the Tree of Life. I, and I assume many other bloggers, saw Evogeneao's booth at the GSA conference in Portland, OR. It is an amazingly cool conceptualization of the tree of life.

Well would you look at that. "Blog" is an increasingly popular buzzword in the published literature.

You gotta feel bad for all those postmodern, pico-cybernetics, that run on cold-fusion though.
Posted by Bryan at 3:01 PM 4 comments:

I've been extremely busy recently getting ready for AGU, applying to PhD programs, finishing off my thesis, etc. So I apologize for not keeping up to date on the blogging side of life. I've got some vague ideas of what will be coming down the pipe, but nothing really worth posting yet. So this is an apology of sorts.

On something to contribute to the world. It has snowed quite a bit here. The city has done their usual bang-up job of not plowing anything so that snow on the roads, and the few sidewalks we have, just gets packed down into a thick sheet of ice. Moreover, for the first few days people were driving around with big mounds of snow all over their cars. While following behind these yahoos, I was just waiting for the impeding road hazard resulting from their car calving a 'snowberg' in the middle of the road (I gave them extra space just in case). I thought I was the only one who gets annoyed when people don't clear off their ENTIRE car (roof, hood, trunk,... everything), but I guess I was wrong.

So, next time it snows in your area, think about people behind your car as well. Do a proper job of cleaning of your car.
Posted by Bryan at 3:22 PM No comments:

Once again I am posting my Halloween costume after Halloween. Same reason as last year. Both years have been fun. However, this year spoke to the fact that I may, or may not, be a lab mouse involved in an intricate scheme to take over the world. 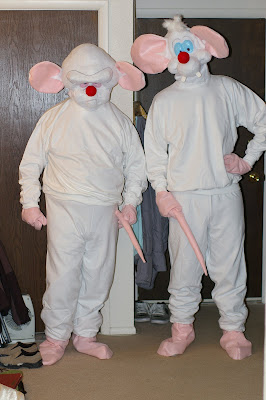 That is me on the left (The Brain, most of the people downtown thought Pinky was the short smart one... dunderheads), and YES the tail is shaped like a lightning bolt. Hope everyone had a Happy Halloween. For my part, I must make plans for tomorrow night. "Why? what are you doing tomorrow night?" you might ask. The same thing I do every night... Try to GRADUATE!!!
Posted by Bryan at 9:38 PM 2 comments: