This has been going around the internet. Science Scouts. I know some bloggers have already found this, as they have left comments under certain badges. I decided to post this for two reasons. First, I didn't want to forget about this site, as it looks like they update the badges every once in a while and I find them funny. Second, I needed a break so I quickly photoshopped together the badges whose requirements I've fulfilled. The background sash color is the color universities use to recognize colleges of science (golden-rod means 'science' I suppose). 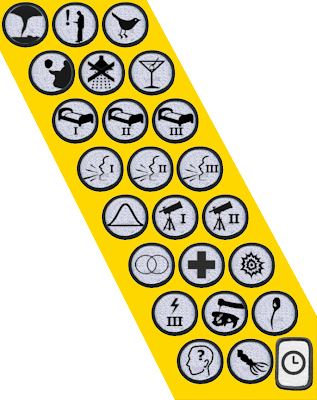 There are some odd loop-holes though. For example, I have shocked myself (unintentionally... I got too near an electric fence that was "off" according to the land-owners anyway) so that warrants the "experienced with electrical shock" level III badge, but I haven't accomplished levels I or II.
So visit the site, read through the comments, have a chuckle. My current favorite comment is Lyndsey's in reference to the "has done science whilst under the influence" badge.
Posted by Bryan at 4:41 PM No comments:

Time flies. Why, I feel like it's only been a year since we last celebrated Charles Darwin's Birthday [/bad joke]. Anyway, I don't have much for this year except for a comic I found somewhere online (can't remember where off the top of my head). 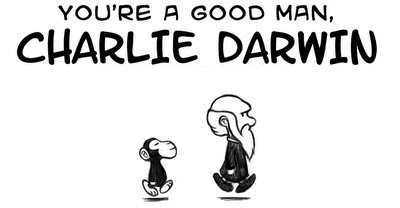 Oh, it might have been from Facebook. If anybody hasn't joined the group "I Bet We Can Find 1,000,000 People Who DO Believe in Evolution Before June", today might be a good day. And yes, there has been ample comment on the use of the word 'Believe'. I'm willing to let it slide and mentally swap 'Believe' with 'Accept'.
Posted by Bryan at 5:22 AM 3 comments:

Irony, thy name is Stein

I was perusing through Hulu the other evening, when I came upon that most dreaded and detestable of genres.... Reality™ Show (which bears no semblance to reality). This one was called America's Most Smartest Model (ugh, the grammar is "humorous", that means quality right?).
Anyway, I found a science based episode. I find it very schadenfreudelicious to read through students answers that are unintentionally funny. I figured what could be better than watching people fumble over basic scientific concepts on TV? So I clicked watch.
I didn't make it to the first commercial break. Far too painful.
However, all was not lost. I did come across a very delectable bit of irony. Ben Stein is one of the judges (why? I don't know?). Furthermore, Ben Stein explains the concept of science. An added bonus is some of the contestants expression towards the word "science". The video is 25 seconds long, and is rated TV-MA probably because the clip is Ben Stein talking and only mature audiences can withstand his "Drone of Ignorance"...
Nicely, stated Ben. However, didn't you summarize science somewhat differently in another forum? If only there was some way to look for a video clip...

The above is an excerpt from an interview of Ben Stein advertising his *ahem* "documentary" expelled. Oh well, at least Stein was able to find a suitably embarrassing position as judge to the only people on the planet who he might be smarter than...
As Stein said: "If [they] can't do [science], it will raise serious questions about their intellectual capabilities". So, by Ben's own standards, he must have serious reservations about his own 'intellectual capabilities'. Now I'll let him continue his decline to intellectual impotence unimpeded.
For a more thorough deconstruction of Stein, might I recommend part 24 of Thunderf00t's ongoing series "Why do people laugh at Creationists" (highly recommended viewing).
Posted by Bryan at 5:17 PM No comments:

I am appalled by this. This morning, NPR reported on a family in Oregon who lost their 16 year old son to renal failure. What appalls me, is the family DID NOTHING to prevent the loss of their son. They belong to a church group that practices faith-"healing", which spurns modern scientifically-based medicine in favor of praying.
Let me say this again. The family LET their 16 year old son die.... of RENAL FAILURE. Kidney problems can be VERY painful. Their son's kidney failure was brought on by a urinary tract blockage that resulted from a minor birth defect. This sort of birth defect would have been detected when he was still an infant (if his family ever took him to a doctor). From there, the family could have been on the lookout for warning signs, and this whole tragedy could have been avoided. Science-based medicine is good about these things. Prayer is not.
What's worse is the family had a track record for ignoring science and letting family members succumb to preventable illness:

The teenager died of complications from a congenital urinary tract blockage that doctors testified could have been treated up until the day he died.

The Beagleys' 15-month-old granddaughter, Ava Worthington, died in March 2008 of pneumonia and a blood infection that also could have been treated.

Instead, Neil and Ava were anointed with oil while the family prayed and laid on hands.

The defense attorney had an interesting note.

But one of the defense attorneys, Wayne Mackeson, insisted the trial was about the care they provided as parents, not about their beliefs [Me: which, I concede, are apparently "fringe"].

"It's never been a referendum on the church. This case involves parents who didn't understand how sick their child was," he said. [emphasis added]

Now don't get me wrong. I am appalled by the fact that people ignore science and reason, and let bronze age mythology rule their lives. But I agree with the defense on this case, it isn't their belief that science is apparently an affront to religion, it is that they are totally unqualified to act as a parent. However, this argument of ignorance does not give them a pass (the defense wants the sentence to be reduced to probation). I understand it is the defense's job to get the best result for their client, but the possible sentence of 16-18 months seems lenient to me. Especially since this group has a track record for not understanding how sick some child is (their grand-daughter died just 9 months prior under similar circumstances).
We aren't talking about the sniffles or a sore throat. We are talking about RENAL FAILURE. The 16 year old's Blood-Urea-Nitrogen level was 288 milligrams/deciliter (kidney failure starts around 60, normal levels are between 7 and 20). Science-based medicine could have saved this kid, "up until the day he died". Science-based medicine could have saved the grand-daughter's life. Faith-"healing" robbed these kids of their lives.
Posted by Bryan at 4:48 PM 1 comment: