So I just got this email forwarded to me:

WITH APOLOGIES FOR CROSS-POSTING

Following the earthquake in Chile at the end of February the Geological Society of London has made available a range of papers on the Lyell Collection covering the tectonics of the region. See:

These papers will remain open access until the end of April 2010.

Please share information widely with colleagues, and do let me know if you have any queries.

There are some pretty cool papers over there, including 9 papers written by Charles Darwin from his voyage on the Beagle. They also have papers available for the Haiti quake. So go, read, and enjoy learning about geology.
Posted by Bryan at 5:17 PM 1 comment:

Yesterday was a good day. I turned in the final draft of my thesis before my defense, I went to the local bar with some friends, and I generally had a pleasant evening reading popular fiction. Then I checked my email around 10:30 pm. My advisor sent me an article pertaining to my general research area. He is underwhelmed and said the article was "hot" off the presses. My mood was deflated and, reading the author list, I thought this group admitting uncertainty about the bolide impact extinction hypothesis was less likely than meeting a fundamentalist Christian who views the Bible as allegorical.
Perhaps you've seen the headlines. It's Official... according to Yahoo! Experts Reaffirm.... according to Eureka Alert. And Scientists Settle.... according to the LA Times.
It's nice to know the media is still capable of framing a non-story in contentious terms. The article that started this recent round of hullabaloo is here (Science requires a subscription, but I'd be surprised if your local library/university didn't subscribe. Or you might be able to pick up the article at a newsstand).
My take on this article is along the same lines as my advisor. There is nothing new in this article. Nothing that warranted its publication. It is billed as an impartial assessment of the facts as they stand. However, it is little more than a restatement of Alvarez et al., 1980. And, like the prior study, it makes the same mistake of overreaching the dataset. I concede that this paper demonstrates that a bolide impacted the Earth at approximately the KPg boundary, but this was established in the Alvarez study. I further concede a likely crater for this event is Chicxulub, but this was established by Hildebrand et al., 1991. These are the paper's strengths, but I don't understand why it takes 41 authors 4.5 pages to retread old ground.
You read that right. FORTY-ONE authors. One more author and they would have achieved the Adams Quotient of Verisimilitude. The only reason I can see why this paper, that says nothing new, had 41 authors would be to attempt to give the impression of a false consensus (I have no proof that is what they were doing, but that is the impression it gave me). If this is true, this paper boils down to nothing more than an argument of authority.
This paper fails in the exact same way that Alvarez et al., 1980 fails. It does a brilliant job of demonstrating that a bolide impacted the Earth around the same time as the end Cretaceous extinction event. However, it never establishes causation. Correlation does NOT equate to causation. In fact, you could not ask for a better example of this fallacy than the first sentence of their conclusion:

The correlation between impact-derived ejecta and paleontologically defined extinctions at multiple locations around the globe leads us to conclude that the Chicxulub impact triggered the mass extinction that marks the boundary between the Mesozoic and Cenozoic eras ~65.5 million years ago.

Now, I don't want to give the impression that just because I criticized this article I must be against the bolide impact extinction hypothesis. This is not the case. I don't think we have sufficient data to draw ANY conclusions regarding the causal mechanisms of ANY extinction event. Furthermore, I don't think we have a sufficient data set to even determine the RATE of ANY extinction event.
While it is good to have a skeptical eye when examining science, it is important to not become a denialist. One technique I have found that helps me walk the line between healthy skepticism and outright denial is list what evidence it would take to convince you of the contrary. If that evidence is reasonable for the situation, it is likely you are just expressing skepticism rather than denial. So in that spirit, here is the evidence/advances that I want before I am willing to begin to draw conclusions regarding causal mechanisms in an extinction event:
1) Standardization of the terms "Catastrophic" and "Gradual". It seems like a little thing, but nobody has adequately defined these terms in this context. For example, ask yourself if "Catastrophic" refers to a rate (if a rate, where is the cutoff? Is this cutoff based on anything or is it arbitrary?) or does it refer to a magnitude (same questions, where is the cutoff and what is the cutoff based on?)? I've seen both usages in the literature. This is actually one of the side projects I have been working on. But if someone beats me to it, all the more power to them.
2) We are able to surmount the Signor-Lipps effect. This is the biggest obstacle to overcome in extinction studies. Sadly, I have seen very few studies that turn the Signor-Lipps effect inward to examine itself. Though there are some, and I remember writing about one. They make for good reads too.
3) We are able to distinguish between an extirpation event and an extinction event. Did the taxa really die out where we find the highest in situ fossil? Or did the taxa just shift their geographical extent, and settle down in an environment that isn't conducive to preservation?
That should be a good start. I can see it taking an entire career to fully address these three issues.
One more thing before I finish this post. When I was an undergrad, in my sedimentary basin analysis class, several of us had "goofy" answers when we didn't know the answer to a question our Prof. asked us. Mine was about "arboreal deposition", I liked the idea of sand suspended in trees. Anyway, a friend of mine was a fan of Aqua Teen Hunger Force, and his response when he didn't know the answer was to state "Meteors Did It!". In that spirit, I photoshopped a "propaganda" poster for the bolide impact hypothesis. Enjoy! 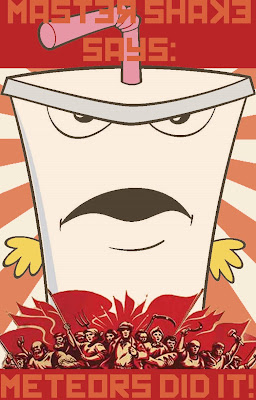 *: an homage to "12 Angry Men". I have no way of knowing the disposition of the scientists who wrote the article in Science.
Works Cited:

Wow, I really don't know what to say.

I've been nominated (and made it as a finalist apparently) for best blog in the Conservation and Geosciences category. Huzzah! I doubt that I will win, my vote would be either Highly Allochthonous or Dave's landslide Blog, but I am flattered by the nomination. On a side note; Any engineers, mathematicians, or computer scientists out there could take the best research blog in your category easily.
Posted by Bryan at 4:06 PM No comments: