There's an App for That

In keeping with my one post a month schedule for the blog, I decided that what better thing to talk about in January than applications for a geologist's new iPhone or iPad. Assuming you got one over the holiday season.

There have been a couple of pretty nifty applications that have an Earth Science theme to them. Below are some of the ones that I have had an opportunity to play around with myself.

The first is called "iSeismo" (yes the little "i" is becoming disturbingly common these days). iSeismo turns your iPhone, iPod, or iPad into a makeshift seismometer (as the name would imply). Here are some screen shots of the application I took while messing around with the software: 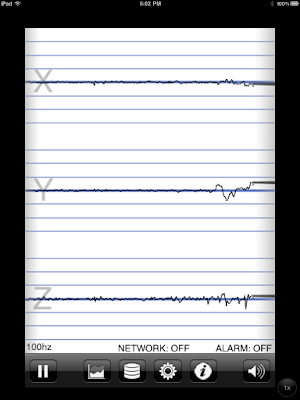 just a couple of wobbles from pressing the buttons to take a screen shot, but if I bump the table it is resting on... well the result is rather predictable: 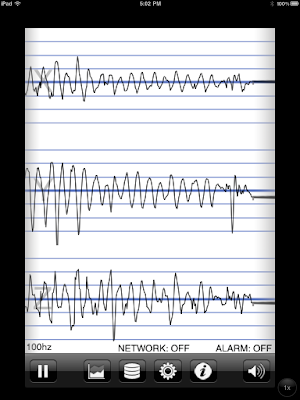 If you're curious about what the three lines represent, they each measure the acceleration along one of the devices axes. Diagrammed below: 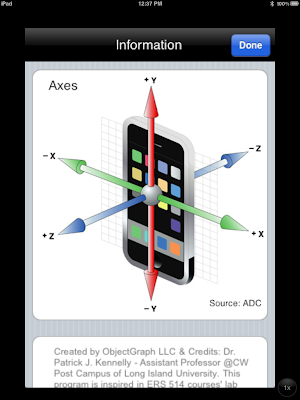 The best part about this application is it is free to download. So go ahead, shake the hell out of your device... for science!

The next application was all the rage at the last GSA meeting in . Several members of the British Geological Survey announced the release of another free geology application called iGeology. 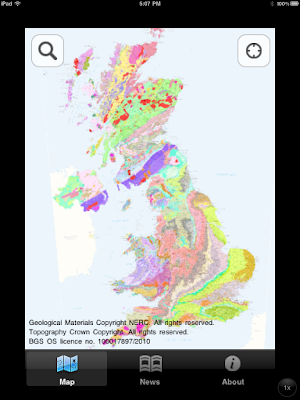 For example I do a basic search for "Siccar Point" and it takes me to the scottish border. 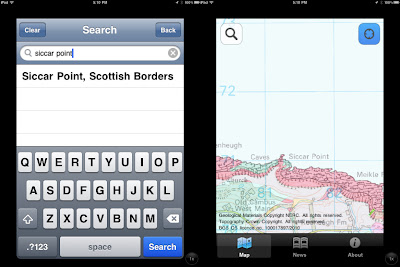 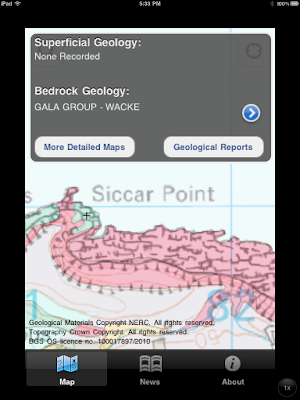 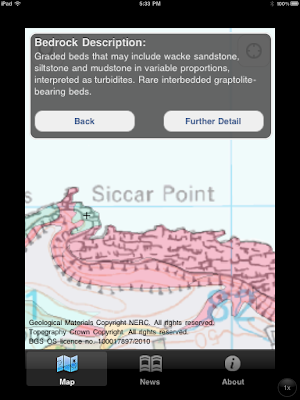 You can also tap "further detail" to send you to the BGS website where you can order geologic maps or additional information. Like I said, I would use this more if it wasn't only about the , but I still like the application. I can't fault the British Geological Survey for focusing on their own turf after all.

But what if I really wanted to look into getting an application that is relevant to the location where I live. We can't all be fortunate enough to have the BGS as our national survey after all. Well you might be interested in learning about an application called "Earth Observatory Observer" (look no "i" at all!). 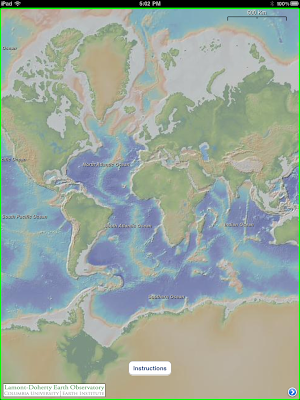 While it doesn't have the ability to use your present location to display information on the local geology (a feature I really like in iGeology), you can run around the entire planet. Just tap the little blue arrow in the lower right corner. 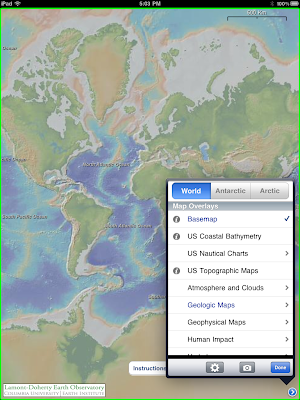 There is a wide variety of different types of maps you can load on top of the basemap, including arctic and antarctic specific maps. But since I am talking about the Geology, lets load the Worldwide Geology map. 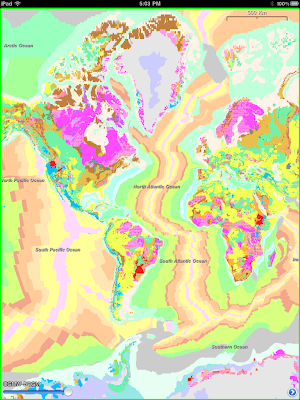 Look at that nice image of sea-floor spreading and subduction. However, you can only view so much geology at a 1:50,000,000 scale map. No worries. You can load up more detailed maps for various regions. Here is a zoom in on the (left is the world map, middle is the US Age and Formation map, and the rightis the rock type map).

All in all, it is pretty nifty. It's also free!

However, interactive geologic maps are only one of the things that has been turned into an app. Wouldn't it be nice to have a handy-dandy resource concisely summarizing vast swaths of literature regarding climate change? There is yet another FREE application for that as well. I vaguely remember talking about Skeptical Science at one point, but that was before I could download the application. Fortunately, their website offers a complete list of the arguments and the science.

The setup for this application is a list of common claims made by climate change deniers (they use the term "skeptic" when they mean denier, but that doesn't really detract from the value of this software). You just tap on the claim listed in the application and the application summarizes both the denier's claim, the scientific standing, and a detailed explanation about the science. For example I just tapped the "It's not happening" heading and the "2009-2010 saw record cold spells" claim (below are a series of screen shots that should stitch together): 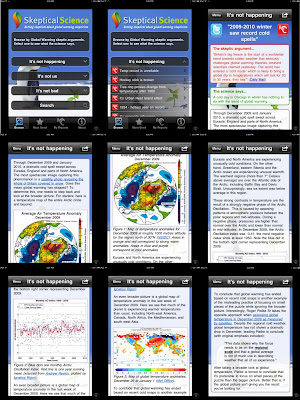 This is a phenomenal app that is bound to make denialists squirm. And to reiterate, it is free! Plus, unlike the geologic map apps, you don't need access to the internet while using it. It only requires periodic connections to update the database, but other than that, you can browse it wherever you happen to be.

One final application that I have seen out there turns your iPhone or iPad into a Brunton compass. I know what name you are thinking of, but somehow the developers resisted the urge to name it "iBrunton" or "iCompass". There are two versions available. One is called Lambert, the other is called GeolCompass. I can't say much about either at this time, because I haven't downloaded them (though it looks like Lambert lets you make stereonets on your device). Mainly I have put off downloading them because I can't think of a worse thing to do to my iPad than drag it into the field with me (or my iPhone if I had one). Maybe one day, but not right now.

Hell, I wouldn't even drag my old decrepit laptop into the field, and it was held together by duct tape and good intentions. Don't get me wrong, I don't mind technology in the field (My digital camera is a regular piece of equipment that I bring and I use a GPS device more regularly these days).

I just don't want to spend ~$400 on a device that might not work properly if I drop it in the field (or it gets dust into its case, or it gets wet), especially when other options are available that work just as well. That said, a decent Brunton Transit will run a couple hundred bucks as well, but you can drop it, get it wet, etc, and it will still work. Same for the durability of my field book and pencil.

Technological preferences aside, I highly recommend every geologist with a device that works with the apple app store download the free software:

They are all phenomenal.

Hey! This is an AWESOME post. I don't even have an iPhone but I still think this is so freaking cool. Thanks for doing the round up!

There is one mistake here, it is Earth Observer, not Earth Observatory (which points you at some satellite image tools). It would be nice to point out which of these require network access (Earth Observer does, and I'll bet the app for Britain does too).

A whole separate series of state-by-state GISes that include geology exist that can be used offline (like in the field)--Integrity Logic's suite of Geograph State apps. Not quite the same as Earth Observer, and they cost cash, but can work offline. Sadly at the moment not upscaled for iPad.

Oops. Thanks cjones, my mistake is corrected.

As far as which apps require a network link, I didn't think of that. But you are correct that both "iGeology" and "Earth Observer" require network access.

"Skeptical Science" does as well, to an extent. It can operate without network access, but only with information it has already downloaded within its updates.

"iSeismo" works without network access, and I would imagine that the compass apps work the same way (but I haven't downloaded them, I just know they exist).

As far as taking things like my iPad or an iPhone in the field; I, personally, am just not comfortable with the concept. I don't even take my cell phone out of my car when I am in the field and it is basically an old "candy bar" style phone.

One day I think the technology will be durable enough for me to drag it over hill and dale, but right now I am concerned it is just too fragile.